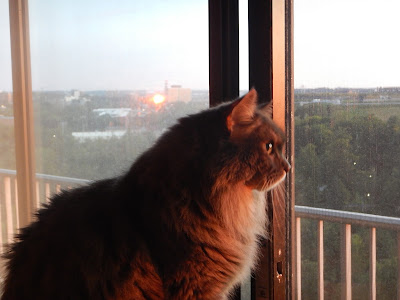 Our dear Junior cat is gone now. He left yesterday, April 30. I didn't accompany him on his final journey. I petted him and told him to be a good kitty. Dan was with him all the way.

Junior's prognosis was never encouraging from his initial diagnosis on March 2. He put up a good fight, as we did and as his friends and admirers and caregivers at the Atlantic Cat Hospital did — Dr. Julia and all the dedicated staff.

In the end though, we couldn't ask any more of him. I knew it was up to me to make the final decision and I knew he would let me know when it was time. His world had become very small and he wasn't eating enough to sustain his strength. He needed help with some of his everyday motions and he was losing interest.

Junior was 12 years old. He was born at the SPCA where Dan and William went and chose him. He chose them really. He was so vocal in his demand to be chosen that they couldn't ignore him. He was so young when he joined us, he still had the blue eyes of a little baby kitten. He was too tiny to climb the stairs. I carried him up at night and put him on the bed. During the night, he would find me and burrow into my hair at the back of my head. He would gently knead and purr and yes, suck a little bit, thinking he'd found his proper Mama. The back of my head didn't suffice, unfortunately.

He and Grizzly grew apart over the years and didn't really like each other but it was clear they liked each other at one point.

He got his name because to a casual viewer, he and Grizzly looked somewhat alike so to allay confusion, we just decided they would be Grizzly and Grizzly Jr. And so Junior he was.

We would have liked him to be an indoor cat but no such luck. He turned out to be the most outdoorsy cat of them all. Even in the worst winter blizzard, he would wait patiently until he heard Dan or William shovelling the deck and that would be his signal to demand the door be opened. They would make him a little path and he would go down one or two steps and then scoot under the deck where he apparently had his own designated restroom. In all the time we lived with a backyard, I think he only condescended to use a litter box a handful of times and clearly found the whole idea quite distasteful. 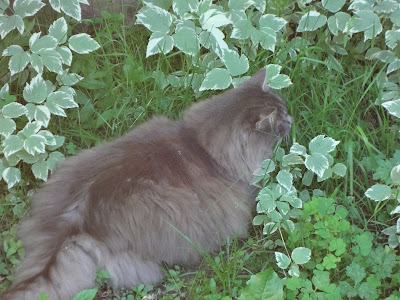 He was definitely a lover of Nature.

I suppose he found it hard when we moved to an apartment and his outdoor days were over. We couldn't let the cats out on to the balcony because we live quite high up and couldn't take the chance. He became contemplative and enjoyed spending time on the high perch where he watched the comings and goings of pigeons and wished he could get his paws on them. 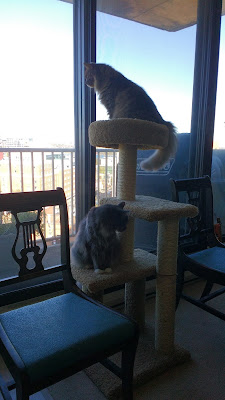 William is out-of-town but he said an affectionate farewell before he left, knowing that Junior wouldn't be here when he returned. When we talked on the phone later, William said, "I think he knew that he had a good life."

And insofar as cats give much thought to the quality of the life they're living, I guess William is probably right.

Posted by Sharon Fraser at 3:33 PM